Free Shipping on All Orders Over $75!

The Doughnut Shop In America First Mayflower Shop
(Early doughnuts)
In the early 1920s, Levitt taking notice of the popularity of the doughnut decided to open a doughnut shop. This shop became known as the Mayflower Doughnut Shop and was located in Times Square, New York City. This shop became the first link in the country’s pioneer doughnut chain, and subsequently became known as the Doughnut Corporation of America. This shop also featured the first leading coffee in America as well, Maxwell House Coffee.
Following in Levitt’s footsteps and buying products from him, most doughnuts shops of the 1920s were small and owned by families. With the crash and depression of the late 1920s to early 1930s, most doughnut shops disappeared. However, following World War II, doughnuts shops began to have a boon again. Prior to the boon, in 1933, a young entrepreneur, Vernon Rudolph, opened a shop in Winston-Salem, North Carolina. This shop was famous for a creamy doughnut made of potatoes, sugar, and milk that was lightly fired to a golden brown. The aroma of these doughnuts being made, caused some passersby to stop in and purchase them. Rudolph seeing the effect, punched a hole in his shop and opened the first Krispy Kreme Doughnut shop. Rudolph also explored his own invention side when he made the Ring King in the 1960s to help bolster the production of yeast rising doughnuts, as the Levitt’s was more for cake doughnuts.

Following World War II, more and more business minded people were finding the Doughnut shop appealing. An example were the Pelton brothers’ who established the Spudnuts doughnut shops in 1940 and by 1948 had over 200 shops nationwide. Al and Bob Pelton set out to create a lighter doughnut and developed a mashed potato flour doughnut. This, like Krispy Kreme, set them apart from other doughnut chains. 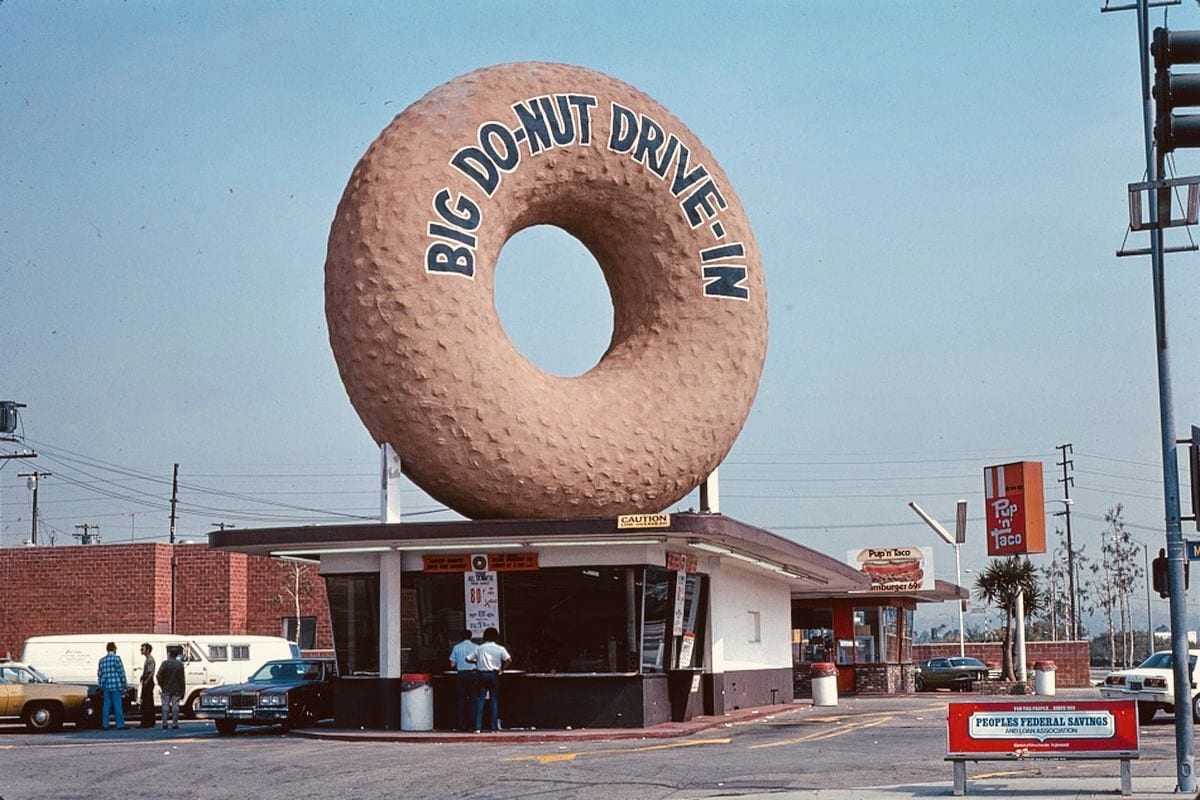 Big Donut Drive-In
(Big Donut)
In 1948, William Rosenberg opened Open Kettle, a restaurant selling donuts and coffee in Quincy, Massachusetts. Taking ideas from Levitt and his Mayflower store, Rosenberg added coffee, milk and other drinks to the menu and added seating in his store as well. The problem he faced, was he did not like the name of his store. The name Open Kettle was to pay homage to the New England area in which the store was located, but Rosenberg wanted to expand and believed the name would not fit outside of the area. He summoned his workers together one day in 1950 and had a session on renaming the store. One of the employees asked, “What do you do with a doughnut? You pick a chicken, you pluck a chicken, you dunk a donut…” And with that, Rosenberg exclaimed, “That’s it” and the store was named Dunkin’ Donuts.

Around the same time as Dunkin’ Donuts coming to life, another company was too; the Big Donut Drive-In. The Big Donut Drive-In was created by California business man, Russell C. Wendell. However, the Big Donut Drive-In did not remain a steadfast name and was sold to different owners in the 1970s. The most famous of these remaining doughnut stands is Randy’s Donuts. Randy’s still uses the same look as the original and continues to serve the same style of doughnuts to this day.

There have been other doughnuts shops that have sprung up, but these are the ones that have stood the test of time.

233 10
Open
Some people dress in their Sunday’s best , other

203 20
Open
Ready for a whisky and donut tasting extravaganza

286 22
Open
A wonderful time in Melbourne with family, friends

72 18
Open
Am I doing this right? 😂#nationaldonutday My al

31 0
Open
Before and after! It’s hard not to like themaltr

70 0
Open
Doughnuts and whisky! Two words that make our day.

255 20
Open
Yet another distillery exclusive pickup from KY. T

735 32
Open
Have you ever tried whisky and donuts? This Old Fa

246 5
Open
Rumour has it today is #NationalDoughnutDay, would

1333 6
Open
This guy has some serious whisky knowledge! Pic a

163 0
Open
With a smooth and relaxed finish, BRILLIANCE is sw

530 33
Open
There were so many amazing, sincere, and unforgett

Free Shipping on All Orders Over $75

What are you looking for?